In continuing our best case fan series of posts – we have our best 200mm case fan review within this post. While we looked at quite a few fans, but we can only recommend 6 overall.

The benefit of a 200mm fan, is the size can bring lower RPM’s to push the same amount of air through your build as other smaller fans. Lower RPM’s typically bring lower noise. So if you’re looking for a silent fan – the 200mm fans are your best bet.

As with our other fans, we look at the air pressure, bearing type and noise level that each fan produces to come up with the best 200mm fan available.

Bigger fan blades can give more air, even in low RPMs. So if you are looking for the best 200mm case fan, you might want to take a look at this one first. 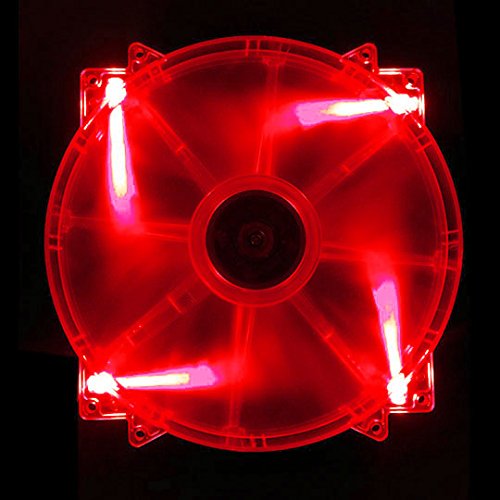 The CF20SL Apevia is 200mm fan (obviously), and it can blow a lot of air to your system. The airflow for this fan is unbelievable at 125 CFM, and it stays quiet even at the max fan speed of 800 RPM, with a noise level of just 20dbA.

This fan only has 0.68 mmH2O static pressure, so it would be best to mount it in an area without a lot of obstructions.

We could not find what bearings are installed for this fan, however, but the life expectancy is said to be 30,000 hours (just under 3.5 years).

There are three colors to choose from; blue, red and green. This one I chose to display is a blue colored frame and fan with blue ultraviolet LEDs, so you can expect them to light like jewels once they are turned on.

The LEDs cannot be turned off though, it turns on when your computer is powered on.

The lights cannot be dimmed as well, so that is somewhat a downside for this fan.

This fan could have been better if this was PWM, but with its price and specifications, it still has a place on our list to find the best 200mm case fan.

Looking for a stylish fan that can cool down your system? BitFenix has a fan just for you. 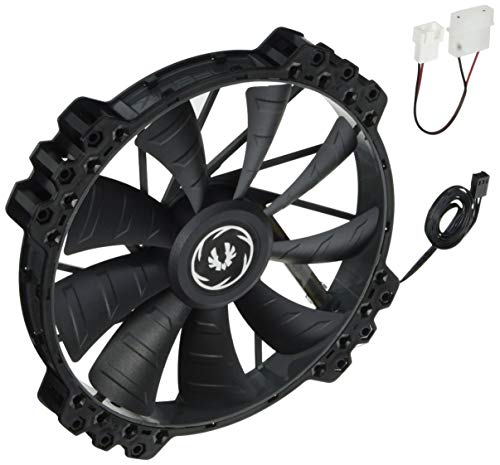 Bitfenix is well known for its good-looking casings, and it also is evident in their case fans, the BitFenix BFF-SPRO-20025KK-RP (a crazy long name) is one good-looking 200mm fan. It does not stop at just being good-looking, fortunately.

This case fan earned its spot on our list due to its excellent specifications (not aesthetics). The BFF-SPRO-20025KK-RP has an airflow of 148.72 CFM ±10%, and static pressure of 1.26 mmH2O. So even in tight spots, you are sure to get ample air.

The fan blades can spin at 900 rpm and still be quiet; max noise level is 27.5 dB(A). You can expect this fan to last for a long time since it is using Fluid dynamic bearings that reduce vibrations as well.

The fan blades are aerodynamically designed to push more air into your system and keep it from overheating. If you look closely, you can see that the fan blades are somewhat like the ones for high static pressure fans.

So why lower on the list with all these benefits? Mainly due to the fan blades sticking out (or are close to flush) to the face which can lead to rubbing on some of your parts, so you need to be careful with the placement.

The BFF-SPRO-20025KK-RP is not a PWM case fan. However, you can still use a fan controller to reduce the fan speed. Another thing is if this has LED lights, there would be some more flash to it. However, this is just a minor thing you can live without.

This fan sells at around $24.00 and definitely a fan worthy adding to our best 200mm case fan list. 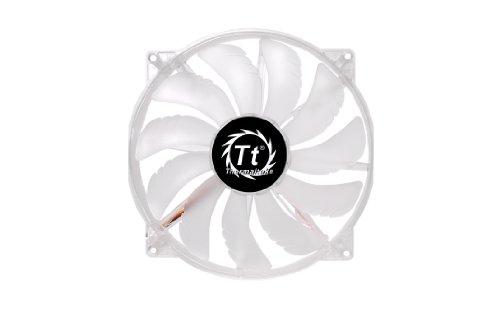 Thermaltake has been creating computer products since 1999, from mice, keyboards, casings and power supplies, Thermaltake is also known for their cooling fans.

The CL-F016-PL20BU-A is an affordable case fan, but it is still packed with features that can go toe to toe with other brands even with the premium ones.

This fan has an airflow of 129.639 CFM, and static pressure of 0.996 mm-H2O, at fan speeds of 800 RPM. It uses a 3-pin connector, so definitely, this is not PWM. The fan blades look like wings of an aircraft so expect it to handle air turbulence with ease.

This fan is a little noisier than others on this list at max fan speeds the noise level for this fan is 28.2 dBA

The case and fan blades are made of durable plastic, and are both transparent, and has blue LED lights to add aesthetics to it.

One thing I would like to point out though is that it could have been better if this fan has fluid dynamic bearings instead of the sleeve bearing. Lifespan for this fan is 30,000 hours (just under 3.5 years). However, the fan will halt unexpectedly once the lubrication for this fan fails.

Then again, this is the cheapest fan on our list, so buying a new one in 3.5 years (assuming your running this fan non stop for 3.5 years…) is not going to break the bank will it?

If you are looking for a fan with the largest airflow to cool your gaming rig, and won’t mind the extra noise, then this fan is just right for you. 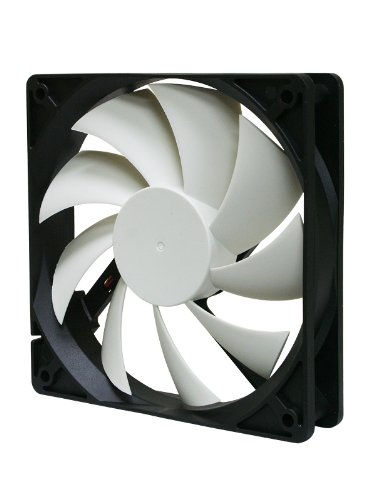 NZXT is a company that specializes in making only the best computer case and cooling systems. NZXT’s FN-200RB is up next in our best 200mm case fan review.

This fan is not as silent as the other fans we have on the list. The noise level is 37.25 dBA when the fans are spinning at 1300RPM. The sound, however, is not mainly from the motor, since it uses rifle bearings that reduce friction and vibration. The noise is more of the air flowing from the fan.

This fan is made of durable plastic; the frame is black with white fan blades. Unfortunately for people who like LEDs with their fan, this one doesn’t have one. Another thing that this fan lacks is the anti-vibration mounting pads. The latter is probably the worst downside to this fan.

These fans are built to last for a long time, and NZXT is confident about their product they added a two-year warranty to it.

Finally, a PWM fan in our Best 200mm case fan list, Noctua’s NF-A20 is built for airflow and static pressure. 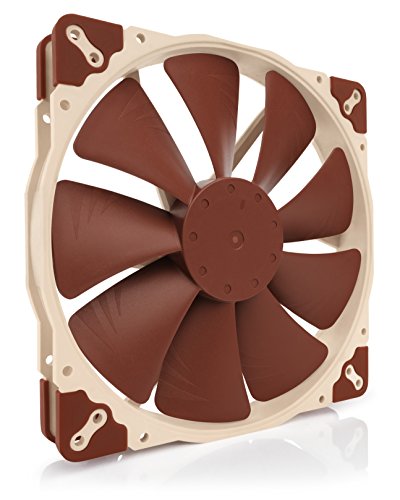 Noctua is a brand that is actually known for their cooling system. And without a doubt, this fan is a great buy for your gaming rig.

Packed with a lot of features. This fan has an airflow of 86.4 CFM and static pressure of 1.08 mm H₂O; this fan can cool down your system even in places with air obstructions. The fan’s design is more similar to fans that are built for static pressure.

Vibration and friction is not a problem with this fan, and this will last for a long time since this fan has the improved SSO2 bearings installed in them. The case has rubber pads to isolate vibrations as well.

This is arguably the best 200mm case fan out there, but I’m a frugal person and the fan is more costly than the top choice (and has lesser airflow). Pricing is relative of course, if you’ve spent a bunch of money on a custom 1,000 gaming build then another $10 is not that much. The choice is yours!

One thing to hate about the fan is the color, but then again it might just be me.

If you are looking for a case fan that can cool your gaming rig even with low fan speeds, then you have to look at the MegaFlow 200 by CoolerMaster. This is our choice for the best 200mm case fan. 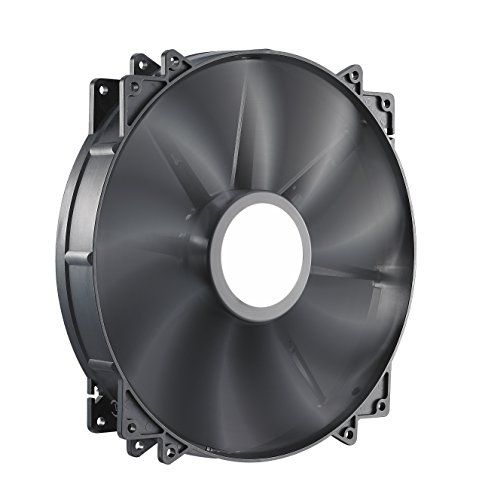 CoolerMaster guarantees high-performance cooling for your precious gaming rig with their MegaFlow 200. The fans have four color variations to choose from.

The fan blades are aerodynamically designed for airflow. The airflow for this fan is 110 CFM, the static pressure, on the other hand, is just 0.595 mm. The best feature for this fan is its low noise level at only 19dbA, and the fan speed is the only 700RPM.

Like any other 200mm fans you need to make sure your case is capable of taking these fans to avoid wasting money.

They are built to last however because this fan is using sleeve bearings, I have my doubts how long these will last since sleeve bearings tend to stop working all of a sudden if the lubrication fails. However, case fans are not a critical factor when it comes to cooling. Sure it cools the motherboard and other components, but I would worry more if this fan is used for the CPU’s heatsink.

I’d say sleeve bearing aside the overall feature of this case fan is excellent and I have seen great reviews for this fan as well. It has the right to be in the top spot of our Best 200mm case fan list.

In conclusion, there are other fans out there that might catch your attention, and you may think it is better for your gaming rig…but I doubt it!

The Noctua fans are probably the best, but the cost of the fan is the reason I dropped it to number 2.

We hope you liked our search for the best 200mm case fan.