When it comes to gaming, having a reliable pair of headphones is an essential part of any gamer’s set up.

With that in mind, the XIBERIA Gaming Headset crushes it. Offering clear and crisp binaural sound, but also in terms of its integration with PC and Macs. It also stands out from other competing brands in part because of its extreme comfort (perfect for that long hour binge gaming sesh) and durability.

Many other headsets that fall into the same class and price range often don’t offer the same degree of support and adjustable features. The headphones have decent padded interior which ensures 360 degree immersion without feeling like you’re carrying around a massive piece of gear on your head. 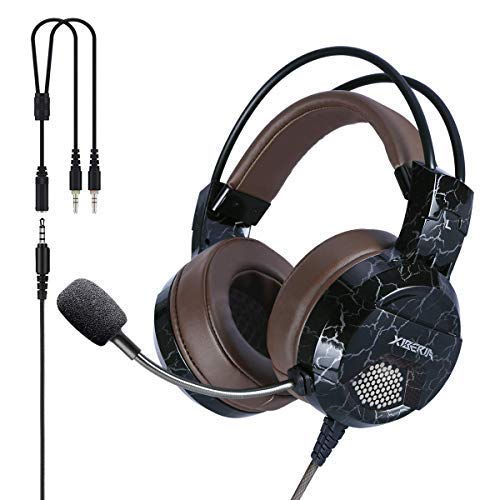 The People Behind The XIBERIA Gaming Headset

The WCA (or World Cyber Arena) is one of the largest eminent gaming matches across the world . There is something fitting about the fact that the XIBERIA Gaming Headsets are specifically designed with their organizations purpose.

The Chinese company behind their production have only really been in the market for the past two years; However, combined with extremely reasonable prices and a pretty reliable track record in terms of quality and customer satisfaction, they’ve quickly risen to become one of the more popular headphones for both avid and moderate gamers alike.

Essentially, what you see if what you get – and when it comes to the XIBERIA Gaming Headset, there’s something a bit comforting about that. Both headphones are connected via two lightweight and flexible bands, and attached to a floating leather band that’s wide enough to distribute the weight of the entire headset.

Over time you can expect the elastic to sag a bit, but if you take care of your headset they have more than a few years in them. The headphones themselves are well-built and heavily padded with PU leather, and allows for hours of gameplay without becoming painful. Keep in mind it’s crucial to adjust them to the dimensions of your own head beforehand!.

People with small heads have found some disparities in terms of getting the headphones to sit comfortably, but one thing XIBERIA has routinely attempted to do (or so it seems) is steer away from overly ‘tight’ setups that crush the speakers into your ears.

Overall, they also have a really elegant balance in terms of sound levels – whether you’re immersed in a video game war zone with exploding shells all around you, or you’re walking through a creepy mansion and want to pick up on the most nuanced noises, the XIBERIA brand tends to accommodate both of these without distortion.

The omnidirectional microphone complements the setup, and is rated to about 38 decibels give or take, meaning that you’ll have no problem communicating clearly and directly with your friends, especially in those moments when teamwork is paramount. The XIBERIA Gaming Headsets also function just as well for watching videos and movies or listening to music, and they have an impressive range on their bass.

There have been some variable reports on the quality of sound, but again taking advantage of their warranty is always an option.

Another small drawback, however, is that even though they are marketed as having noise cancellation properties (and for the most part this holds true), the sound out is not quite the same – depending on the fit of your headphones you can expect from noise leakage. The potential noise leakage is something to take into consideration if you plan to be listening to your tunes at max volume while your girlfriend/boyfriend sleeps beside you!

An added feature is the inline volume control and a mute button, so you can easily experiment with your own fine tuning of audio levels to find one that suits.

Another benefit that the XIBERIA Gaming Headset has over other headphones is the durability of their cable. At 7 feet long, it allows for you to go a decent distance when you’re AFK or having your setup across the room.

The cable is also not so long as to require minutes of bundling it up when you have to travel somewhere. The fact that the cable itself is also strong and covered in a harder less flexible shell than conventional rubber cables on cheaper speakers is also a big bonus, since often times this is where normal wear and tear tends to be localized.

The heavy ‘anchoring’ of the power cable to the headphones themselves was promising, and probably responsible for the 18 month guarantee that every XIBERIA Gaming Headset comes with.

It would have been nicer to see some longer warranties available, but again considering the demographics of people who are likely to purchase this kind of headset – high to medium caliber gamers who put a lot of hours on their gear – it’s pretty reasonable given the price.

And of course, the price can’t be understated either. Easily within the $20-40 range, you’re getting a lot of bang for your buck, so XIBERIA can be forgiven for some of their drawbacks given that other headphones can easily set you back hundreds of dollars. It’s easy

Save The XIBERIA Gaming Headset For Later
Add To Cart

As a gamer ourselves, there’s a significant advantage in having a headset that cooperates with all elements of itself. The XIBERIA gaming headset manages to offer a surround sound system capable of delivering very clear output, and a really reliable omnidirectional mic, without having to sacrifice quality in either.

I don’t like having a mic right in front of my face all the time, but even when I adjusted it so that it was to the side, it was still able to pick up my voice perfectly. As a gamer, having that inline volume control is also extremely helpful for making minute adjustments while in the middle of a match (or, conversely, being able to quickly mute if you need to).

Lastly, I also really appreciated the durability of the cord – both in terms of preventing ‘kinks’ in it that can affect sound quality over time, and in terms of having a strong attachment to the USB and the headphones themselves. For a price-to-quality ratio, it’s difficult to find a better deal…Just don’t expect any fancy packaging!

What I Think Could Be Better

The sound leakage could definitely be an issue for some, and although I haven’t tried it out solely as a sound cancelling pair of headphones, my initial experience with them is that this probably isn’t the case. That doesn’t mean they don’t work very well as headphones and what I use them for, but if you’re hoping for all the benefits of actual noise cancelling headsets (say, for long distance flights, etc.) then you might be a little disappointed.

In general, I haven’t experienced any problems with comfort, but there definitely seems to be a margin for error in terms of adjustability for certain head sizes, and this can be compounded by the fact that they don’t have the “tight” fit ascribed to other headsets in this style.

Who Would I Recommend It For?

THE XIBERIA Gaming headset is certainly geared more toward the gamer community – especially those who want a cheap alternative to some of the more custom and expensive headsets on the market.

I think this would also make a great addition to classroom settings or academic situations, such as language learning (Rosetta Stone, for example), since it has unparalleled mic capabilities and doesn’t seem to fall into the trap that other cheaper or shoddier headsets fall into, which is sound degradation.

The XIBERIA gaming series of headsets were definitely made for people who have a love of games, and who have been gaming long enough to know what they like and what they don’t like.

Comfortable headphones that endeavor to rest lightly on the head, while still providing an adequate degree of suction and coverage, means you’ll never miss a sound – even when an enemy NPC sneaking up behind you.